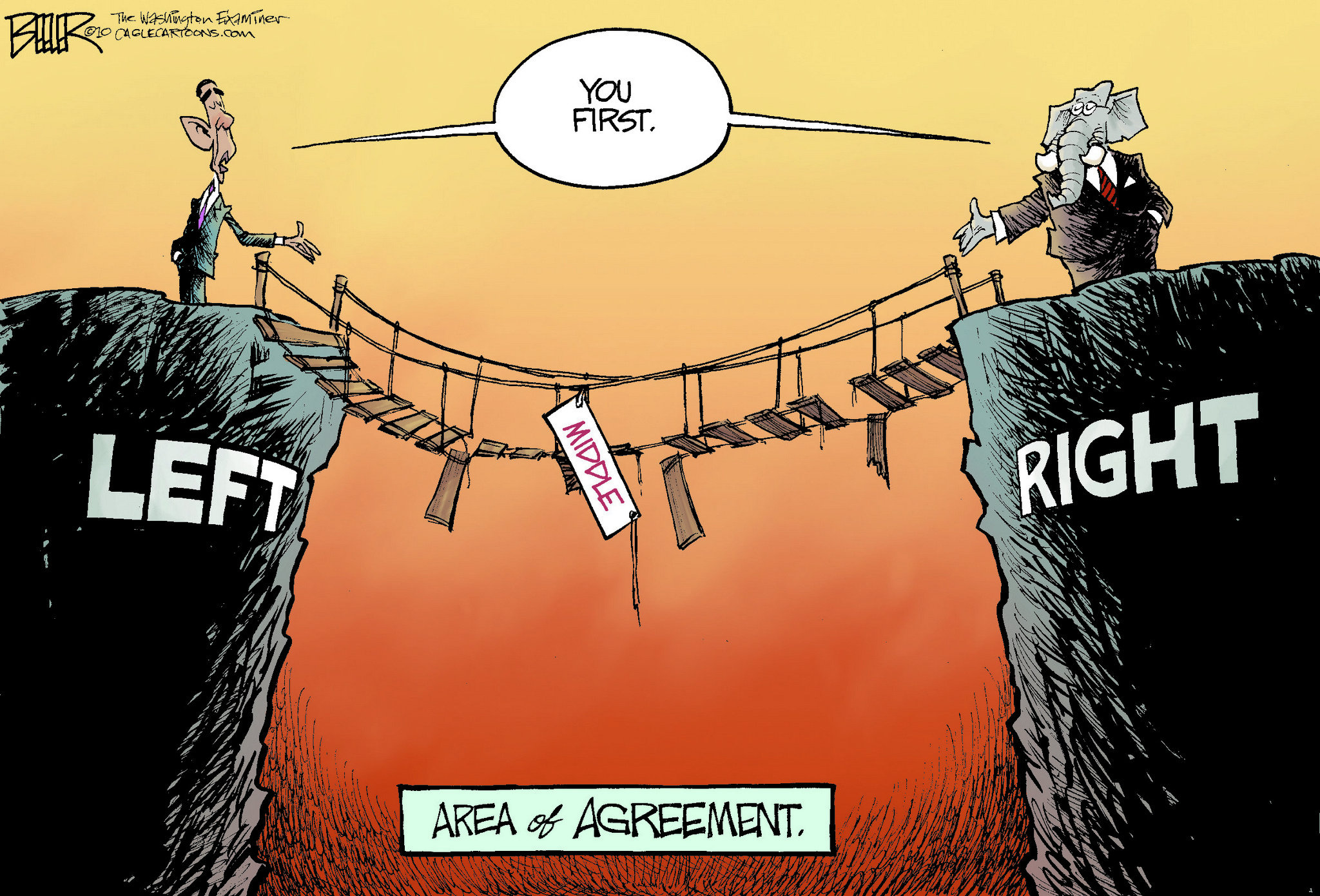 The growing gap between Left and Right in politics is plain for all to see. It provoked the following thoughts , with a special focus on western societies. Don’t take them too seriously, or too lightly.

If you want to please the Right, tell them that:

If you want to please the Left, tell them that:

Both wings cannot stand the temptation of making the world look clearer than it is. For the Right, everything looks like a threat that requires self-defense. For the Left, everything looks like injustice that requires solidarity with the oppressed. The latter sounds more noble than the first, and so the Left doesn’t hesitate taking the moral high ground in debates. The Right, on the other hand, accuses the ‘multicultural’ and ‘egalitarian’ Left of destroying ‘Western’ (if not ‘Christian’) values and traditions. And so, Left and Right feel morally empowered to fight each other in a never-ending trench war.

How to combine the positives in both

Without pretending that this trench war can be ended easily, here are a couple of ways in which Left and Right can move towards more unity:

Sounds all good ‘on paper’, these recipes for unity, but profound mentality shifts are usually not a matter of the will but of necessity, of circumstances that demand a radically different response. Let’s hope that Left and Right will read the ‘signs of the times’ in time and need only ‘mild’ circumstances to acknowledge the necessity of overcoming their differences and pursuing a united and sustainable way forward.

Promising new technologies can suddenly make the future look a lot less gloomy. Today part 2: reforesting the world’s most barren lands by nurturing “the underground forest” and allowing it to heal itself.

Meet Tony Rinaudo, also known as the Forest Maker or Tree Whisperer, one of the very few people on earth whose achievements can be seen on satellite images. This man is responsible for regenerating no less than 240 million trees in the last 30 years.

In 1983, after two years of doing reforestation ‘the old way’ in Niger, namely by planting trees, Rinaudo despaired:

I was in charge of a reforestation project that was failing miserably, it wasn’t that I was particularly dumb, it was the same story all over west Africa. And I remember the frustration that just hit me: north, south, east, west, was a barren landscape, and I knew perfectly well that 80 or 90% of the trees I was carrying [in my car] for planting would die.

But then Rinaudo took a closer look at the few bushes scattered around the land. He knew these bushes were in fact trees that had been hacked down. Suddenly he wondered: what if we would prune these left-over trees and allow them to grow?

In that moment, everything changed. We didn’t need to plant trees, it wasn’t a question of having a multi-million dollar budget and years to do it, everything you needed was in the ground.

Rinaudo had found an “embarrassingly simple solution” to a seemingly insurmountable problem. The root system of the chopped down trees remained alive under the ground; a whole “underground forest” was still available, as Rinaudo would describe it. The only thing needed was some human care and protection, allowing the trees to grow and heal themselves. In Rinaudo’s words: the only thing needed was some humans “working with nature rather than hitting it on the head all the time.”

After his discovery, Rinaudo had to overturn generations of accepted wisdom, as well as a resistance to giving some land back to nature.

When you’ve got people who are on the edge of starvation every year, not just in famine years, you’ve got this perception that you need every square inch of farmland to grow food crops. And here’s this nut telling people they should sacrifice some of their land for trees.

But as soon as farmers started to see the results of Rinaudo’s method (called Farmer-Managed Natural Regeneration, or FMNR), the new technique took off. And here we are: 3 decades later and 240 million trees richer. At the UN’s global climate talks in Katowice (December 2018), Rinaudo explained the profound impact of these trees. They:

Working with World Vision since 1999, Rinaudo has taken his technique across the world, from arid Somaliland to tropical East Timor. His big dream: to see FMNR introduced into at least 100 countries by 2030, as a powerful way of improving people’s lives and pursuing Sustainable Development Goal #15.

In September 2018, Rinaudo received the Right Livelihood Awards, often described as the Alternative Nobel Price. Rinaudo received the award “for demonstrating on a large scale how drylands can be greened at minimal cost, improving the livelihoods of millions of people. [Rinaudo’s reforestation method] has the potential to restore currently degraded drylands with an area the combined size of India.”

Below a video about Rinaudo’s work and impact, produced by World Vision. Much more information can be found on the FMNR website.

If you have a spare hour, enjoy the video below in which I take you around the globe, summarizing the major positive and negative trends in today’s world. In 2018, I held this lecture for senior leaders of major corporations in Sydney and Melbourne (companies like Perpetual Limited, QBE, Deloitte, Karrikins Group, Oxford University Press, Worley Parsons and Pearson) in my role as Chief of Vision within World Vision Australia. This video was recorded by QBE in Sydney.